On February 22 2021, DIGI launched a new code of practice that commits a diverse set of technology companies to reducing the risk of online misinformation causing harm to Australians.

The Australian Code of Practice on Disinformation and Misinformation has been adopted by Twitter, Google, Facebook, Microsoft, Redbubble, TikTok, Adobe and Apple.

All signatories commit to safeguards to protect Australians against harm from online disinformation and misinformation, and adopting a range of scalable measures that reduce its spread and visibility.

DIGI developed this code with assistance from the University of Technology Sydney’s Centre for Media Transition, and First Draft, a global organisation that specialises in helping societies overcome false and misleading information. The final code has been informed by a robust public consultation process.

The Code was developed in response to the Australian Government policy announced in December 2019, where the digital industry was asked to develop a voluntary code of practice on disinformation, drawing learnings from a similar code in the European Union.

What’s in the code?

In under two minutes, this explainer video provides a quick overview of what’s in the code.

Download the Australian Code of Practice on Misinformation and Disinformation, developed by DIGI for the digital industry. 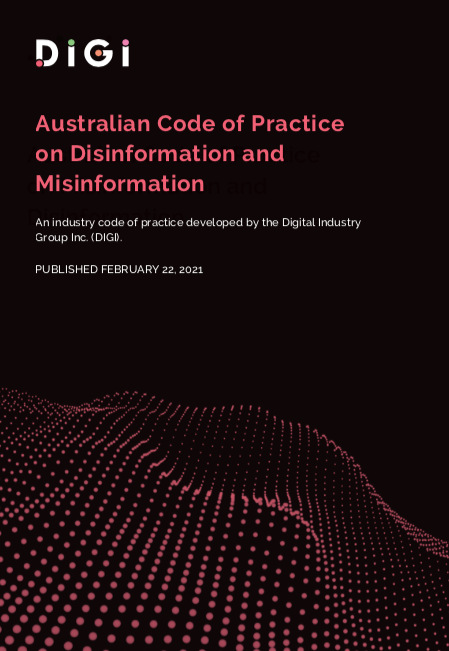 A report prepared by the DIGI in relation to submissions received during the Code’s public consultation.

This Discussion Paper provides background research relevant to the development of a code of practice for disinformation and misinformation online.

Within three months of their adoption of the code, all signatories must provide DIGI with the commitments they are adopting, and a transparency report about their work in relation to those commitments. The first set of reports was published on May 22, 2021, exactly three months after the launch of the code, and provide new insights and data into the management of mis- and disinformation in Australia.